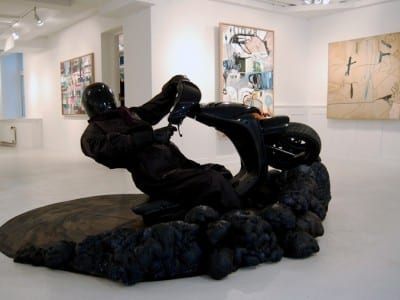 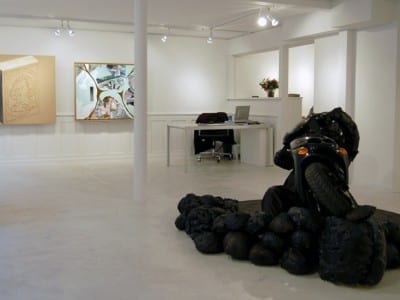 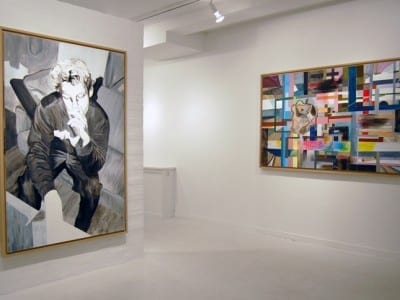 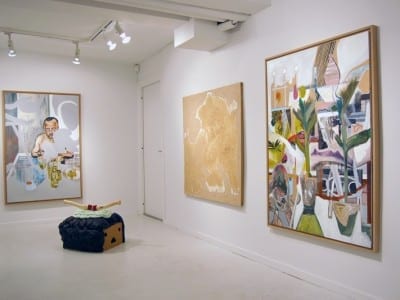 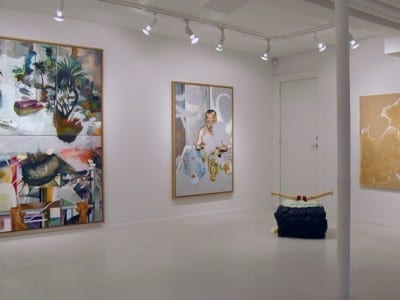 PING PONG is Mikkel Søndergaards second solo show at Galerie Birthe Laursen. Since the exhibition FLAMING in 2005 Mikkel Søndergaard have continued his intense and experimenting work, and a new series is ready containing both paintings on canvas as well as woodcut reliefs and a large sculpture installation. It is and original and well integrated series that varietes in mediums and motives but kept together by an exploring and insisting approach to the art making and to modern peoples attempt to navigate in an unmanageable world.
In his works, Mikkel Søndergaard forms outlandish narratives using shapes, colours, photographic layers, patterns, text and realistic elements. As for many painters now, the narrative is central to Mikkel Søndergaard, but unlike the relatively great number of fairy tale tellers, he is more concerned with (post)modern and (hyper)complex narrative structures. Hints of narrative realism is being exposed to visual dissection and processed through the painting machine of Mikkel Søndergaard.
The sculpture installation is a modern kind of an equestrian statue presented in a more American tradition. Unlike the European tradition concerning designing and structure, Mikkel Søndergaards sculpture appears in and natural life size scale and confronts the paintings of the series. With the PING PONG series we are far from a romantic head-in-the-clouds escape, and instead in for a really reality round trip.

Mikkel Søndergaard is born 1976 in Randers, Denmark. He lives and works in Copenhagen, and are educated at the Royal Danish Academy of Fine Arts in Copenhagen and at Kolding School of Design as master in Graphic Design an illustration

The exhibition continues through Saturday 17th of March 2007.