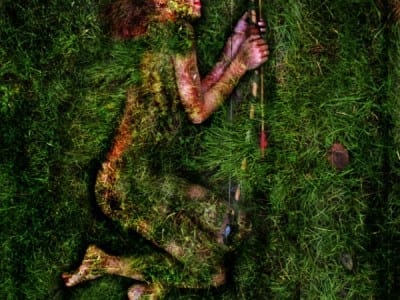 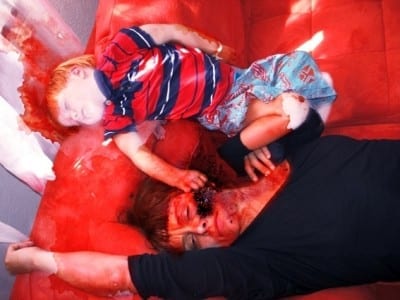 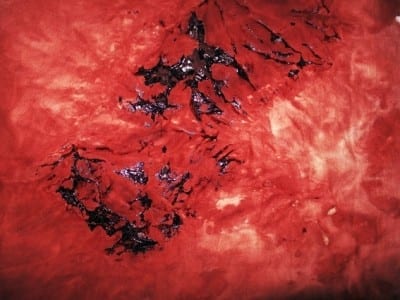 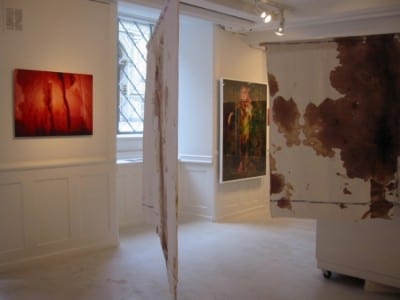 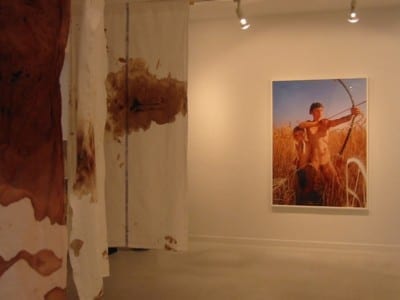 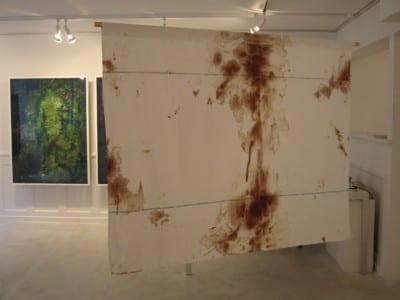 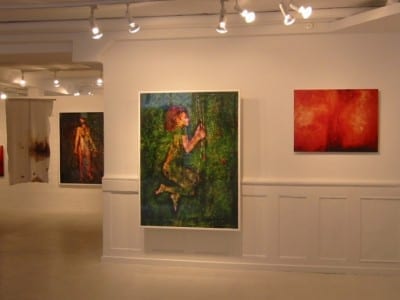 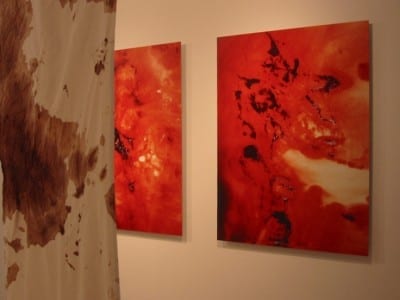 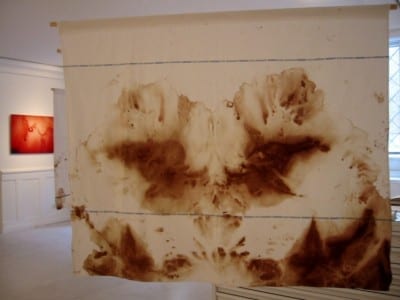 It’s about birth and it’s about death. No less. And mostly it’s about the woman. The woman is Liv Carlé Mortensens artistic instrument – in an attempt to uncover the woman’s landscape in all nuances from the intimate family sphere to the Amazon screaming, when she with the child carried under the tear off breast cuts the umbilical cord and goes to war. Amazon – Map Of Birth is a photo and installation “documentation”, with the blood trails on the birth sheet as symbolic maps of our entrance to life and as concrete marks of the pain and the victorious woman’s sacrifice. In contrast with the birth sheets are the Faithful unto Death series. In the death icons the human being is blurred out and brought back to nature in a peaceful scenario. The link here is the mother and child. The amazon and her offspring completes this beautiful, serious and aggressive cycle of life.

I pull oceans of paper up from the red sea between my legs, wipe my fingers on the gown of the night and run around the garden letting the red paper flowers flutter to the grass. They crackle and I consider decorating the breakfast table with them, but they are still dripping fresh blood, they would stain the tablecloth, the white cloth, and make grounds in the coffee cups, so I wait and fetch the camera, in order to hang up emulsions framed in glass in the gallery in Bredgade later on. What price a morning bleed in crowns and on paper?

From the diary text in AMAZON

Liv Carlé Mortensen is born in 1970 in Copenhagen and lives and work there. She is educated at Fatamorgana School of Photography, Cph. Liv Carlé Mortensen has had numerous exhibitions, among others Women2003, Making Eyes, Himmelby (with Jane Vorre at Galerie Birthe Laursen 2004) and the solo exhibition Autobiography (2001) at MIRA Art Gallery, Stockholm. She has been photographer on several books and latest done the television show Drømmebilledet for DR, Danish national television.

In addition to the exhibition the artist book AMAZON bounded with 160 pages text, colour and b/h photos will be available at the gallery.

The exhibition continues through July 7th 2007.